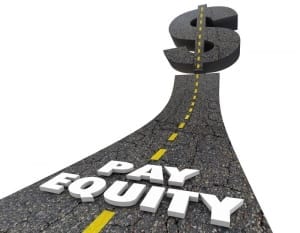 April 17, 2018
New York State Legislation
Achieve Pay Equity Law amended New York’s existing equal pay act (N.Y. Labor Law §194) effective January 19, 2016.
• No longer can rely on “any factor other than sex” to explain pay differential, but must be “bona fide factor other than sex” which cannot be based on a sex-based differential, must be job-related and consistent with business necessity.
• Imposes liquidated damages up to 300 percent on the unpaid wages for a willful violation
• Employers may not restrict employees from sharing wage information or take adverse action against an employee who inquires about, discusses, or discloses his or her wages or the wages of another employee (with some limitations).  Expands this protection to supervisors and managers as well, going beyond the protections provided under the National Labor Relations Act.
On June 21, 2017, the New York State Assembly advanced a bill which would restrict an employer’s ability to ask job applicants about their salary histories. The bill is currently before the New York State Senate.
New York City Legislation
October 31, 2017, New York City became the first municipality in the nation to enforce a law prohibiting all employers in New York City from inquiring about job seekers’ salary history during the hiring process.
• Includes prohibiting searches of public records.
• Employer may not rely on the salary history information in determining what to offer the applicant in salary, benefits, and other compensation.
• If job applicant discloses salary history without any prompting, then employer can consider this information.
Note:  Albany County, NY also enacted a similar ban on salary history inquiries effective December 2017.
New Jersey Legislation
On March 26, 2018, the New Jersey Legislature passed the Diana B. Allen Equal Pay Act.  New Governor intends to sign bill into law on April 24, 2018, to take effect July 1, 2018.
• Prohibits paying employees who are in a protected class at a lower rate of compensation, including benefits, for substantially similar work, when viewed as a composite of skill, effort and responsibility.
• Expands protected characteristics beyond gender and race/ethnicity.
• Prohibits retaliation against any employee for discussing or disclosing compensation information about any current or former employee.
• Prohibits requiring employees to waive or agree to not make such disclosures as a condition of employment.
• Places additional reporting requirements on state contractors.
• Extends statute of limitations for pay equity violations to six years.
• Awards treble damages where an employer is found in violation.
• Stipulates unlawful employment practice occurs each occasion that an individual is affected by a discriminatory compensation decision.
NJ Senate also passed bill S559 (awaiting Assembly vote), which would prohibit any employer from inquiring into the salary history of a job applicant and from relying on an applicant’s salary in determining a salary amount in any stage of the hiring process.

Other Recent Developments in the News

More and more public companies have been pressured to disclose wage data and eliminate the gender pay gap in their organizations, either through the urging of shareholder activists like Natasha Lamb or as a way to proactively get ahead of the issue and differentiate their company from competitors.  Examples include: Apple, Ebay, Expedia, Intel, Starbucks, Nike, Costco, Glassdoor, and Citigroup.
In the courts, Google stays in the spotlight with a class action lawsuit that began in September 2017. The Court initially dismissed a sweeping class action complaint alleging systemic pay discrimination on behalf of “all women employed by Google in California,” but this March the Court decided to allow an amended and only slightly narrowed class action to proceed covering 5,000 women and 30 separate job positions at Google. The Court’s new decision to allow the class action to proceed was driven by the Plaintiffs’ allegation that Google had a company-wide policy of considering new hires’ previous salaries when determining starting salary and job level.
Also notably, while the circuit courts have been split on the question as to whether employers can rely solely on prior salary to meet the legitimate factor other than sex defense, most recently the Ninth Circuit on April 9, 2018, overruled a prior precedent-setting decision and held that “[r]eliance on past wages simply perpetuates the past pervasive discrimination that the Equal Pay Act seeks to eradicate. Therefore, we readily reach the conclusion that past salary may not be used as a factor in initial wage setting, alone or in conjunction with less invidious factors.”
Recommendations for Employers
Ensure all company policies, procedures and practices are updated to be consistent with new pay equity laws prior to or by the effective date of the law.
Consider engaging in attorney-client privileged equal pay studies to ensure that compensation disparities can be explained based on legitimate, non-discriminatory reasons.  Consider the timing of such studies, such as prior to finalizing bonuses, merit increases and other benefits.

Do you have questions about Pay Equity? Contact the Compass Workforce Solutions office to speak with one of our HR Business Partners today.

Any cookies that may not be particularly necessary for the website to function and is used specifically to collect user personal data via analytics, ads, other embedded contents are termed as non-necessary cookies. It is mandatory to procure user consent prior to running these cookies on your website.