#MeToo Movement has Made Firms Cautious About Holiday Celebrations 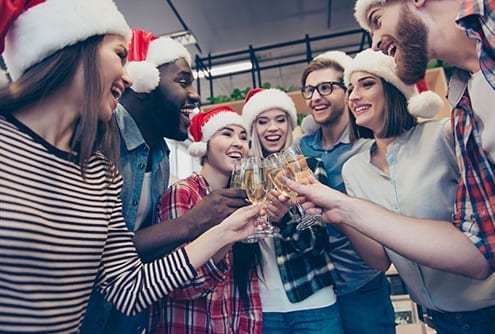 The percentage of companies planning to hold holiday parties has dropped to 65.4 percent, down from 72.7 percent last year, according to a national survey from one outplacement and executive coaching firm.

Holiday parties are a good opportunity to recognize employees and build camaraderie, but they can also pose a liability, particularly with all the heightened awareness around the #MeToo movement.

That may explain why the percentage of companies planning to hold holiday parties has dropped to 65.4 percent, down from 72.7 percent last year, according to a national survey from Chicago-based Challenger, Gray & Christmas Inc., an outplacement and executive coaching firm.

That doesn’t mean local companies have to nix their party plans, but they should consider taking precautionary measures to help curb potential inappropriate behavior.
“I think companies this year will be diligent in keeping behavior in check,” says Andrew Challenger, vice president of the coaching firm.

He said he believes the survey numbers reflect the impact of the #MeToo movement, which “has made HR departments much more cautious about their holiday parties.”

Companies are taking a different approach than they did a decade or so ago, when holiday parties were viewed as more of “an opportunity to drink and eat on the company dime,” says Christine Ippolito, principal at Hauppauge-based Compass Workforce Solutions, an HR consulting firm.

Ippolito said she doesn’t see local companies stopping their holiday parties, but rather making changes such as limiting the time span of an open bar or the number of drinks, say through drink tickets. That has to do with the #MeToo movement, but also with limiting liability tied to drinking and driving, she says.

“We’re seeing more thought going into the structuring of the event,” says Ippolito, noting firms are highlighting the fact that the purpose of the holiday party is to celebrate, but also connect with one another.

Janine Dion, senior vice president of sales and marketing at the Crest Hollow Country Club in Woodbury, is seeing this as well. “We’re seeing more photo booths, themes, games and good old-fashioned fun being planned,” she says. “We suspect this trend is to encourage less drinking, much more team interaction and a more inclusive, positive company vibe.”

This year, corporate holiday party bookings are up 5 percent over last year, she says. Last year, when the #MeToo movement was new, the venue saw a slight drop in bookings as CEOs re-evaluated their company policies, Dion said. “A national shake-up, whether it’s social or economic, often impacts company celebrations,” she said.

If companies are concerned about holding an after-hours party at an off-site venue, they can hold a celebration during the day on-site, say experts. Challenger, Gray holds its party on-site and makes it family-friendly by allowing workers to bring their children and spouses, says Challenger, noting that no alcohol is served.

Allowing employees to bring spouses and/or family members is a tactic Michael Schmidt, vice chair of the national labor and employment department at Cozen O’Connor in Manhattan, is seeing more firms considering. So is bringing their holiday parties on-site.

“People tend to view functions in the office differently than when they’re off-site,” says Schmidt.

An on-site daytime party can also be preferable because employees don’t have to miss time with their family after hours, says David Mahoney, a partner and member of the labor and employment law group at Jericho-based SilvermanAcampora LLP. The law firm typically has a catered luncheon in the office for its holiday party, where no alcohol is served. “It allows the firm to celebrate the holiday season without putting us at unnecessary risk,” Mahoney says.

Upper management should set a good example at any holiday function, he says, and employees should be reminded before the event that it’s still a work event and everyone’s expected to comply with the company’s anti-harassment policies.

Adds Schmidt, “There needs to be an understanding that the workplace conduct rules of the road will continue to apply at these parties.” Proceed with caution: 27% of companies that said they have addressed the issue of inappropriate celebrating with staff and are taking precautions to avoid impropriety at their holiday parties.